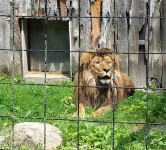 The Bowmanville Zoo has the claim to being the oldest private zoo in North America, starting in 1919 with the unscientific name of “Cream of Barley Park”.

The last time I was there was when I was a child and thus my ability to compare visits is non-existent.

However, one should be prepared for a difference between zoos of this sort and ones like the Calgary or Toronto Zoos. This zoo is in the business of education but also of providing animals for use in television and film. This makes some people uneasy but for others provides an opportunity to actually touch lion cubs.

But first, where is Bowmanville? It is east of Toronto by about one hour (80 km) depending on traffic. It is one of the many Lake Ontario towns that are sprinkled along Highway 2. Most of us drive there via the 401, which like many middle aged men seems to get wider and wider with every passing year.

So, the zoo is interactive, which is unlike others and may make you feel off. Feeding animals with their special food is encouraged. I can imagine more uptight zoos frowning on this.

But some of the animals are regular goats and deer which are fun for kids to feed. There were two wolves that were playing in an enclosure and howled when the lions roared. There’s a show where they demonstrate what animals have been trained to do. Our group chose not to partake. We discovered our boundary for animals in zoos is for the purposes of education, captive breeding for endangered species but not for human entertainment.

Despite this, I enjoyed viewing the diverse animals in their collection and they all seemed happy and busy and just being themselves.

Enjoy the photos we took of the various creatures and as long as you manage your expectations, this zoo is worth the visit, particularly with children.