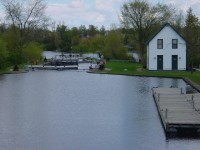 With a population of around 9,000 people the town of Smiths Falls is only a small town, but it’s big on charm! During the summer months in particular this becomes a hive of activity as boats come and go along the famous Rideau Canal, and visitors stop to check out the historic appeal of this Eastern Ontario town.

Smiths Falls is the kind of place that makes you want to stop, get out of your car, and spend some time relaxing, and if you want to stay the night you may be able to find a room in one of the town’s few hotels, then enjoy a meal in one of its friendly restaurants.

There aren’t too many specific attractions in Smiths Falls but even so, it’s a lovely place to wander around on a sunny day. You can walk along the Rideau Canal which passes through here on its way from Ottawa to Kingston, on Lake Ontario, and sit and watch the boats slip in and out of the four locks on this stretch of the waterway. I always find it fascinating to watch the water rise and fall in the locks as the boats make their way up, or down, the gradients of the canal.

You can learn more about the canal and its history within the Rideau Canal Museum, which is situated right by the water in the historic 19th century building that was formerly a mill. Have a look around this interesting museum and then, from June to August you may be able to join a guided tour of the locks from here. Another museum in Smiths Falls is the http://www.smithsfalls.ca/museums.cfm” target=”_blank” rel=”nofollow”>Heritage House Museum, set within a restored Victorian home close to the canal. A tour of this museum gives visitors a look at life in the late 1800s.

A third museum is a must visit for any rail enthusiasts; set within the former Canadian National Railway Station is the Railway Museum of Eastern Ontario. The station itself is an attraction and there are also artefacts to see as well as several engines.

Throughout the year, especially in the summer, there are numerous festivals and special events to enjoy in Smiths Falls, so this isn’t just a sleepy backwater! On Saturdays from May to October the Smiths Falls Farmers Market is a big hit with locals and visitors, but whatever time of year you visit I think you’ll agree that Smiths Falls is a small town with plenty of charm!

And while you’re in the area, visit the even smaller town of Merrickville. Actually this is just a village and it’s home to about 3,000 people, but like Smiths Falls it’s situated on the Rideau Canal. Merrickville has some lovely old buildings lining its streets, while right next to the canal is the historic Blockhouse which was built in 1832 to protect the village’s locks against attack by the Americans. The Blockhouse today is home to a museum which is open during the summer, and this area alongside the canal is the perfect place for a relaxing walk!

Photo and article copyright Claire Bolgil. Claire is a freelance travel writer based in Beautiful BC. Find out more about her at www.clairebolgil.com