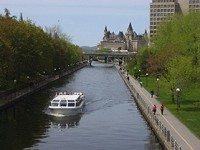 Having visited the nation’s capital on several occasions I can safely say that I am very fond of Ottawa. There are many things that I like about it, but overall I like the fact that it’s such a calm place; almost peaceful and serene despite the fact that it’s home to close to a million people. Maybe it’s because Ottawa has been ranked highly in some of the world’s most renowned surveys – ranked second highest quality of living of any large city in the Americas by Mercer, and 14th highest in the world; or second cleanest city in Canada, and only third cleanest in the whole world.

I also like its contrasts: on the one hand you have the grand and historic Parliament complex on Parliament Hill, contrasting with the strikingly modern architecture of the National Gallery of Canada; and they are both within view of each other. Ottawa is also a multicultural city and it’s officially bilingual as well, speaking both English and French.

Another thing I like about Ottawa is its size, both in terms of land area and population. For a capital city, a population of around 900,000 really is not a lot, and while the city as a whole covers an area of 2,778 square kilometres the main parts that most tourists would be interested in are all just about within walking distance of each other. This makes Ottawa a pedestrian friendly city; you don’t have to rely on transport to get around, for the most part, and if you’re on foot you really get a better feel for a city anyway.

To see some of the slightly farther away sites of interest you can always buy a ticket on one of the bus tours. As in many major cities of the world there are hop-on and hop-off bus tours available in Ottawa that are a great introduction to many of the sights, and if you can hop-off at one of the stops you can get off and spend some time seeing the attraction before getting back on a later bus. And for something a little different Ottawa is the perfect place to try an
amphibus that not only takes you around the sights on land, it heads into the water and doubles as a boat trip! I tried this tour myself and it’s a lot of fun if you want to experience something a little different to the norm!

Photo and article copyright Claire Bolgil. Claire is a freelance travel writer based in Beautiful BC. Find out more about her at www.clairebolgil.com.